On new year’s day, you relayed a little story about your early clubbing days & how you’d get home you had no chance to sleep because your parents would still be raving right into the next day. It conjured up a great little picture in my head of poor YD Femi trying his damest to sleep but his parents dancing around the house. And I read that your dad was a keen club goer back in the 50s. So music played a big part in your life from an early age (you have a brother who’s also a  DJ). What kind of music do you remember hearing at home?

At home we heard a mixture of all styles of music. The main difference between our house and an English or West Indian home was the presence of High Life & Afro sounds, as I’m British born with a Sierra Leoneon heritage. The soundtrack of my youth can be defined by the artist, Prince Nico Mbarga ‘ with his ’Sweet Mother’ (which was voted Africa’s favourite song) this kind of sound was always the back drop to all events in my childhood. Early reggae from the ’Tighten Up’ albums on Trojan records also played a major role.

My older sister Nadia was a Donny Osmond fan but in true Sierra Leoneon style, she also had a James Brown compilation and Let’s Get It On by Marvin Gaye. The radio was pretty much always on & anything funky or reggae was highlighted the Jackson 5 was the fave by far as a kid in the 70’s then came Bob Marley on the Old Grey Whistle Test and artists like Jimmy Cliff with ‘Many Rivers To Cross’. The Sierra Leoneon community in London was small at that time and it would come together for Independence Day events, christenings & weddings.

The back drop would be Highlife, Stax Staple Singers and Curtis. Jean Knight’s Mr Big Stuff was massive . Jimmy Cliff ‘Harder They Come’ Millie’s ‘My Boy Lollipop’, Prince Buster (various) Eric Donaldson ‘Cherry Oh Baby’. A great example of a song that was a pop classic & massive with my kin folk was Johnny Nash’s ‘I Can See Clearly Now’..

Some time in the mid 70s there was a revival of Lord Kitcheners ‘Sugar Bum Bum’ which caused a stir & led to Soca sound being part of the sound in the Sierra Leon community; Soca’s similarity to Afro Highlife being the obvious attraction adding to the tapestry of sound I had at home, with maybe the best example, I’d say being ‘Let Me Love You’ Bunny Mack’. Big pop/rock bands would always infiltrate the vibe as we were open eared to all sorts of good sounds.

Talking of your dad’s exploits on the dancefloor, did you get an emotional moment when you first worked in The Wag which had formerly been one of his haunts as The Flamingo?

I raved & worked in WAG in the 80s but had only a passing knowledge of my dad’s connection with the place in it’s former guise as the Flamingo. The guys at his funeral gave me more of an insight that he & a few friends and cousins had an apartment on Shaftesbury Ave round the corner from the Flamingo, so were regulars there.

I read the Colin Mcinnes book City Of Spades,  the 1st part in a trilogy about African students in 50’s London and the stories that I heard from my dads mates chimed with those in the book in that UK culture was being newly exposed to those of former British colonies from all over Africa. Afrobeat & Jazz was a new London cultural backdrop. 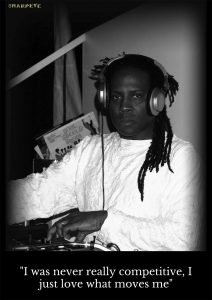 Tell me about your record collecting in the early days. Where were your favourite  record fares & what kind of prices were you paying? Was there a keen rivalry between you & Marco as to who could find the rarest 7″?

Record collecting for me really started when I met Norman Jay. I’d also been hearing Barrie Sharpe play music that I was pretty blown away by. Barrie’s dj partner Lascelles gave my brother & I a tape that had Cymande, Roy Ayers & The Meters on it. I think we wore that cassette out. They were the resident dj’s at the WAG on Friday nights in ’84-’85.

I met Norman through a school friend Alec Selby and we put on a party with Norman’s Good Times in ’86. We organised a Soul music Blues party people paid to come in & we ran our own bar. This led to a friendship with Norman Jay he introduced me to the best spots in town little underground record stores in the all parts of London & the West End . I got the bug though seeing a collection like Norman’s, it was pretty daunting at first. Marco from the Young Disciples was also very instrumental in getting me to starting collecting as we had very similar tastes & he’d been collecting for a while – Studio 1, Rock Steady & Motown from his mum’s influence. I was lucky to meet these dudes, they opened up my musical world.

I then went in pretty hard core picking up music as I traveled the world djing L.A. New York, Tokyo, a few German cities & Paris were all places where I’ve purchased rare joints. Popbeat in Camden was great as Marco IG Culture & I got rare 7” funk tunes for as little as £2, some of which are worth nearly £100 now. One thing I’d like to point out is that I was never really competitive, I just love what moves me & then I share it in my dj sets.

There has been a wealth of Black British talent for many decades; I’m thinking of The Real Thing, Hi Tension, Light of The World, Central  Line, Soul II Soul among others. How much of those early pioneers influenced you?

All of these artist influenced me just by being part of the UK’s musical lexicon. They were all great entertainers that would sometimes even break through to the mainstream and became part of the culture at large. We as Young Disciples actually ended working with Carl Mcintosh from Loose Ends in a collaboration on a song called ‘Don’t Worry’.

Early days along the abandoned Wharfs doing warehouse parties,were you ever worried you’d get police attention?

We did get police attention as we were breaking the law. We would always get people like Judge Jules or another of our co promoters Dan Benidict to speak to the police as they were the white face the Police would be comfortable with turning a blind eye to. Our parties attracted students, musicians, arty types from the fashion & media, there were kids from the’hood’, the music industry, cool ad companies, funky journalists from the Face, ID, Blues & Soul, NME & London underground including the so called Acid Jazz & Rare Groove scene .

That was a kind of collection that the police didn’t know existed, both they & the mainstream media knew nothing about what we were getting together, so we had little attention. The police rarely bothered us until the big raves started happening in the fields & there was a lot more tabloid interest in the drugs at some of those parties. It’s cool to know we did Raves in the early & mid ’80s, way before the Rave scene & house became mainstream.

You DJ’d at a Prince concert. What was he like?

Prince was as allusive as his reputation. I dj’d with Brian Norman from Fresh & Funky I was representing Rotation. Prince thanked us for warming things up but never really addressed us directly. His wife crowd surfed as she was one of the dancers.

Tell me about the time you supported Gill Scott Heron (in Hong Kong).

I was flown out to Hong Kong to play a few nights for a promoter Mickey Jazzhead Smith who was based over there but hailed from the midlands. He had an Acid Jazz scene going in Hong Kong & booked me to warm up for the great man. Gil Scot Heron was known for the high life so it wasn’t a big surprise that he’d lost his passport at the airport on the journey from the States. Mickey had to work wonders with the Hong Kong Authorities to get him in to the country. Gil kindly signed my ‘It’s Your World’ album & put on amazing show (of course)

How important was being nominated for the Mercury Music Prize (for ‘Road To Freedom’ in 1991)?

The nomination was an honour and it helped raise a little awareness for our album. It’s a strange award as they try not to be commercially led  & nominate many underground artists from across genres but then one year I swear there was a Spice girls, Girls Aloud or a big pop group of that ilk who was nominated. It’s tough trying to be politically correct with art and being part of an industry who’s aim is commercial, there will always be some conflicts and opposing views. They are the PC awards but it doesn’t always work that way.

You’ve traveled all around the world. Where is the most unusual place you’ve been, how do the party goers compare to us Brits & is there anywhere you would really like to go that you’ve not?

I could say Japan & Malaysia, Kuala Lumpur, were the most extraordinary as the culture is so different to ours. Japan is slightly more urban & industrial and had a futuristic feel with the Monorail & Bladerunner look about some of the cities. Malaysia is just very traditional even though there are random modern elements in amongst temples that have stood for a millennia. All these places have had folk from the west visiting for decades so it’s not that strange to them.

New artists, who, should we be listening out for?

These are not new artists but great new material – Omar, Simon Law featuring Caron Wheeler, Izzi Dunn, Jan Kincaid from The Brand New Heavies new outfit MF Robots, Blaise Pascal. New artists, there is a young band Jaramo from Bristol that I’ve been in the studio with recently, you should all listen out for them.

What are you working on at the moment?

I’m working on a few projects with dj friends of mine. A talented singer song writer Rebecca Scales I’m also working with Jaramo, an extremely talented teenage live outfit, they used to be called Miniattack & are real outliers.

Keep up to date with all Femi Fem mixes on Mixcloud!